In 2001 Rose Valley celebrated the 100th anniversary of its founding with an exhibition of art and memorabilia from its glory days as a center of creativity. Thanks to a grant from the Department of Community and Economic Development of the Commonwealth of Pennsylvania, we are able to present that exhibition in virtual form. The artists are divided into two groups, pre-1911 and post-1911, somewhat arbitrarily separating them by time of arrival in the Valley, and not by date of the work. In the case of children of the early community, they are listed as post-1911 because all of their work falls in that category. This collection represents the art and artifacts that are still here or near Rose Valley;  migration of families, sales to collectors and the toll of time have dispersed the rest. 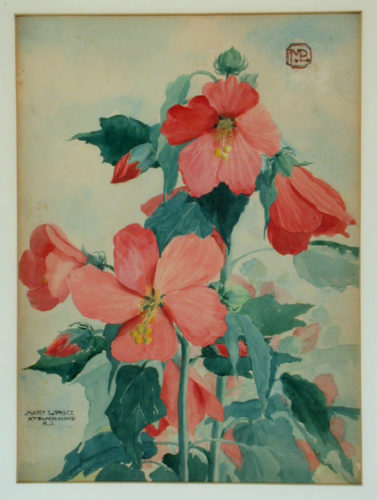 There were many fine artists and crafts people who made Rose Valley their home. Among the first was Howard Stratton, director of the School of Industrial Art (now the Philadelphia College of Art.) Some of his early students were Susan and Mary Price (DeMoll), sisters of Will Price and Carl DeMoll, who was studying architecture. They formed a summer school in 1901 offering instruction in painting and bookbinding. They met on the top floor of the old bobbin mill (now Hedgerow Theatre.) As might be expected, children raised in a society where art and craft was a way of life, themselves became artists. For example, Alice Barber Stephens was a noted illustrator. She was married to Charles Stephens who was both an artist and a respected authority on Native American culture. Their son, D. Owen Stephens trained with N.C. Wyeth. His painting of the total eclipse in Peru in 1937 is hanging in the Museum of Natural History in New York.