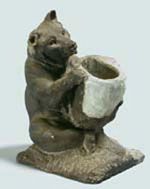 David Lightfoot was a cousin of both the Prices and the Waltons, and started carving animals when he was a child. As an adult he made his living carving animals for carousels for the Philadelphia Toboggan Company. In 1902 he carved two bears to mark the entrance to the Furniture Shop on Old Mill Lane. Nathan Kite gives the following description:

“Now these bears have a somewhat interesting history, and on this wise it was. The bear posts were chestnut trees growing on Long Point to the west of the Rose Valley Shops. Two sturdy sons of toil, Wallie Geary and David Lightfoot, stripped them of bark and limbs and rolled them down to Ridley Creek. Then that Irish plug known as Shackleton’s Molly and old white faced Brownie were hitched up to a cart, Brownie between the shaves and Molly on the lead. The cart was now backed down over the end of one log and it was raised and chained to the axle tree of the cart. The two horses were then started and lo, Brownie started and Molly stood, then Molly started and Brownie stood: now this horse play continued a great while until the wrath of these sons of toil had risen to a great height. Then they changed the horses about, putting Molly in the cart and Brownie in the lead. Each man then provided himself with a woddle that would wear, and Geary took Brownie and Dave took Molly and they woddled those horses for full fifteen minutes; then Molly sat down in the shafts of the cart, placed her ears in a rearward slant and thus she sat.

The two men then conferred lovingly together and the result was that each one procured sand and poured it into the ears of the horses as fast as they shook it out; this treatment roused the Dutch in Brownie at a rapid rate, her wrath was plainly shown and soon took effect in that she pulled the cart, Molly and log up that bank and started for Media, at the 1st bridge the Irish in Molly got on and the two horses went on a run to the Media road where Dave stopped them. Brownie brought out the 2nd log all herself. The holes had already been dug, and the posts were soon stood up and after a deal [of] sighting were pronounced straight. The holes were filled in with dirt and rammed down.

Now it came to pass that every man who came that way pronounced those posts crooked, especially did Francis Day employ his leisure in telling Geary and Dave that those posts were crooked: then would Geary & Dave plant themselves in the middle of the road and would look through one eye and then another, and oft did they compare notes, and at the end Geary would remove a large quid of “Jolly tar” from his ponderous mouth and deliver with unction this judgement: “them posts is pretty dam strait” and this settled the matter until Day again appeared.

Now Dave was a hefty carver of wood; and at this time he lived in the small stone house just east of the Association’s property. Now in this house he fashioned the models of those same bears, working often times by candle light far into the night. When the model of one was finished he built himself a platform around the posts, and he cut and he cut and the bears grew and they grew until a gate way of real merit adorned the property.”