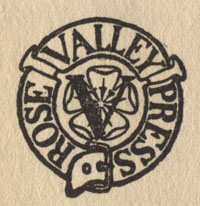 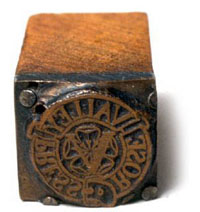 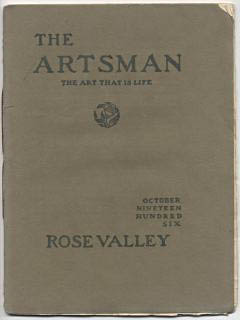 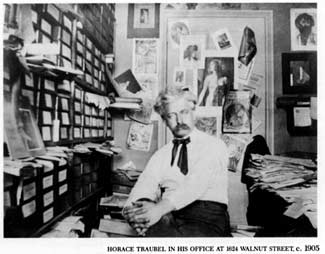 Horace Traubel was a nationally known writer, poet, journalist, editor and publisher. He is best known for his apostolic friendship with Walt Whitman and his nine-volume biography about the poet. He was one of Whitman’s three literary executors and founded ‘The Conservator,” a journal dedicated to keeping the work of Whitman alive. He married Anne Montgomerie, in Whitman’s home in 1891. When he and his wife came to Rose Valley, they stayed at the Guest House. He was enchanted with the utopian nature of the community, and returned to Philadelphia to establish the Rose Valley Press. From 1903 to 1907, that shop published a monthly magazine called ‘The Artsman,’ subtitled, “The Art That Is Life.” Three individuals are listed as editors: William Lightfoot Price, M. Hawley McLanahan, and Horace Traubel, but it is probable that Price did most of the writing and Traubel did most of the editing. Traubel was so skilled in setting type that he often composed editorials by hand setting type at the case.

The Artsman became the voice of Price’s experiment just as The Craftsman was the voice of Gustav Stickley’s experiment. The first issue contained cuts made from Price drawings of two chairs and a table. These illustrations are not referred to in the text so they serve primarily as advertisements for the furniture shop. The text, written by the three editors, is a manifesto in which the men’s hopes for Rose Valley were succinctly set down. Price wrote: “What does Rose Valley hope? It hopes that some men, released from the deadening influences of monotonous unthinking toil, may see such possibilities in life as will make them put their shoulders to the wheel and strive to lift society out of accustomed thought or habit.”

In addition to issuing The Artsman, the Rose Valley Press produced two bulletins about the products of the shops and several announcements of cultural events in the valley. After 1903, Traubel began to use the Rose Valley Press imprint on The Conservator even though Innes & Sons in Philadelphia did the presswork. The press also offered its services for general printing and produced a brochure for the School of Industrial Art in Trenton, New Jersey.