Charles Stephens in
his studio at
Thunderbird Lodge

Charles Stephens (1864-1940) was a teacher, photographer, illustrator, and one of America’s foremost authorities on Indians. His father was Henry Lewis Stephens (1824-1882), an artist and photographer in the early American West. Charles H. Stephens was a cousin of Frank Stephens of Arden, the first arts and crafts colony experiment attempted by William Lightfoot Price.

His work with the Blackfeet Indian Reservation in Montana is probably his greatest achievement. From 1893 through 1930, Charles H. Stephens collected more than 100 Blackfeet artifacts and related material. In 1891, he spent three months living with the Blackfeet tribe. He photographed their daily life, and kept a journal of sketches detailing artifacts, rituals, and individual sketches. It is an impressive collection, revealing early life on the Reservation. Named the Charles H. Stephens Collection, it is now housed at the University of Pennsylvania Museum.

When Stephens and his wife, Alice Barber Stephens, settled in Rose Valley, William Lightfoot Price added two studios to a barn and renovated the space especially for them. It was and still is called Thunderbird Lodge. The fireplace in the upper studio was built in the shape of a Thunderbird, reflecting Charles Stephens’ interest in Indians. On the exterior of the house is a beautifully executed representation in Mercer tile of the same Indian symbol. 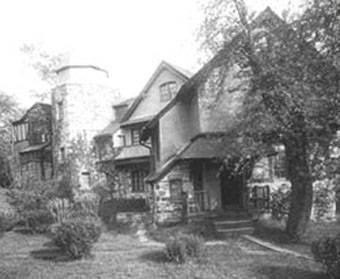