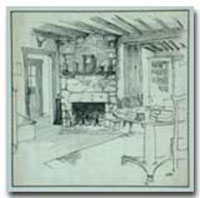 William McKee Walton (1879-1950) was an architect, furniture designer, watercolorist and musician. He was the second of six boys born to Charles and Mary Norton Walton of Philadelphia. At the death of Charles in 1893, Mary Walton took her surviving five sons to be raised with her family in Iowa until age 18, at which time they were sent, each in turn, back to Philadelphia to continue their studies, chaperoned by their aunt, Elizabeth Warrington, and under the watchful eyes of their older cousins, Walter and Will Price. Will attended the Pennsylvania Museum and School of Industrial Arts and apprenticed in the architectural firm of Price and Price. After college, Will joined Price and McLanahan. At the death of Will Price in 1916, Will Walton moved over to his uncle Walter’s practice, and in 1923 became a full partner in the firm of Price and Walton. He was a member of the AIA from 1927 to 1948.

Will Walton was a central figure in the Rose Valley community for 50 years, eventually becoming known as “Pop” to everyone. When cousin Will and the rest of the Prices and their extended family came to Rose Valley in 1901, Will Walton came with them to help design furniture. From 1901-1903 he lived in the Guest House with Auntie Bess and painted many early scenes of the Valley, some of which were made into postcards. In 1903 he and Auntie Bess moved to her new cottage on Price’s Lane. He designed posters and programs for events at the Guild Hall, and created scenery for the dramatic productions. He started a Women’s Chorus in 1905, and was a founding member of the Rose Valley Chorus in 1907, serving as it’s musical director for many years later on.

In 1912 he married Rose Avery and built a cottage next door to Auntie Bess, who by this time had seen the four other Walton brothers – Herbert, Percy, Sam and Joe – at one time or another camping on her sofa. Rose, who had studied at the Pennsylvania Academy of Fine Arts with Hugh Breckenridge, was a talented portrait artist in her own right. She was also an invaluable asset to the dramatic productions at Guild Hall, sewing scores of costumes “late into the night”.