Hedgerow Theatre, America’s first resident repertory theater, has hit upon hard times. Founded in 1923 in Rose Valley, Pennsylvania, the organization was championed by legendary furniture maker and sculptor Wharton Esherick. On March 31, looking for a quick fix, the theater’s board will sell off its inheritance of exemplary Esherick furniture. The orphaned pieces are now sitting in the queue at Freeman’s auction houses in Wayne and at 2400 Market Street in Philadelphia. Eight handcrafted, hammer handle wood chairs and three tables with Esherick’s charming trademark incised into vintage, burnished surfaces will go to the highest bidder. The right buyer may also walk into the venerated theater with a crow bar and cart off an original, built-in Esherick staircase.

Read the full article at the Hidden City website.

The Legacy of Architect William Price Lives On In Rose Valley

From Thunderbird Lodge to Hedgerow Theatre to historic private homes, the late Wallingford native’s pioneering work can be seen throughout the borough.

George Thomas was a 25-year-old graduate student studying art history at the University of Pennsylvania when, in 1970, he spent $75 on thousands of glass plates and film negatives. It was to be his food money for the month, but he had a good feeling about his Freeman’s auction acquisition, which came wrapped in paper and manila envelopes from the office of William Lightfoot Price. “I only knew that he was a Philadelphia architect,” Thomas says now.

The purchase eventually led to a doctoral dissertation guided by a question: How could a designer who reshaped the architecture of his time suddenly
be forgotten?

“Will invented what led into Art Deco,” says Thomas. “Everyone still calls it Art Deco, but it was actually Art Price.”

Read the full article at the Main Line Today website.

By Leslie Krowchenko, Special to the Times

ROSE VALLEY — Ryan Berley does quite a bit of research as curator of Rose Valley Museum at Thunderbird Lodge.

He didn’t have to look far, however, to find a recipe for sand tarts.

The museum provided the dough, ovens and antique cookie cutters and nearly two dozen guests selected their favorite designs at Sand Tarts and Schnitte. Berley, co-owner of The Franklin Fountain and Shane Confectionery, presented a slide show and talk as the buttery shapes baked into crispy treats.

Read the full article at the Daily Times website. 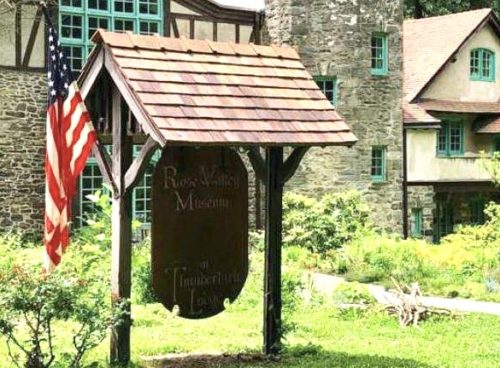 ROSE VALLEY — At the end of “Raiders of the Lost Ark,” when Major Eaton claims the government has “top men working on it” as the Ark of the Covenant is rolled into storage, Indiana Jones grumbles, “They don’t know what they’ve got there.”

The Rose Valley Centennial Foundation has always known what it had in Thunderbird Lodge.

The foundation, which is seeking to raise $1 million to restore the structure, built in 1904 by Arts and Crafts community founder William Price, has been awarded a $99,788 grant from the Pennsylvania Historical and Museum Commission Keystone Historical Preservation Grant program. Refurbishing the building is the foundation’s signature project and the 50/50 matching grant, presented during a recent ceremony at the site, will be used to replace portions of the roof, exterior masonry and stucco.