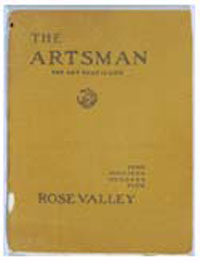 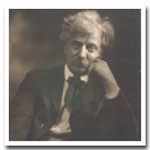 Horace Logo Traubel (1858 -1919) was a nationally known writer, poet, journalist, editor and publisher. He was born and raised in Camden, New Jersey. He left school at the age of 12 and went into the newspaper business, where he learned printing and became a typesetter. At the age of 16, he was the head of the printing office for the Camden Evening Visitor. He came to Philadelphia to work for his father’s lithography shop, and also held other positions in the print industry.

He is best known for his apostolic friendship with Walt Whitman and the nine volume biography about the poet which he authored, Walt Whitman in Camden. He was one of Whitman’s three literary executors and founded”The Conservator,” a journal dedicated to keeping the work of Whitman alive.

He married his wife, Anne Montgomerie, in Whitman’s home in 1891. They had two children, Gertrude and Wallace. Wallace died at the age of 6 of scarlet fever. Anne became an associate editor of “The Conservator,” and Gertrude was a staff member as a teenager.

He, Anne and Gertrude came to Rose Valley and stayed at the Guest House, which, under the management of Nathan and Anna Kite, served as an Inn for visitors to the community. He was enchanted with the utopian nature of the community, and returned to Philadelphia to establish the Rose Valley Print Shop. From 1903 to 1907, that shop published a monthly magazine called “The Artsman,” subtitled, “The Art That Is Life.” Three individuals are listed as editors: William Lightfoot Price, M. Hawley McLanahan, and Horace Traubel, but it is probable that Traubel did most of the editing.