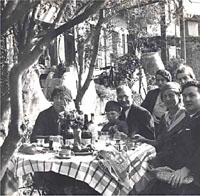 Elenore Plaisted Abbott was a nationally known illustrator, scenic designer, and artist (both landscape and portrait). She was born in Lincoln, Maine. She studied at the Philadelphia School of Design for Women and at the Pennsylvania Academy of Fine Arts. She also studied in Paris, where her work was exhibited at the Academie des Beaux Arts. Upon her return in 1899 she enrolled at the Drexel Institute, where she studied with Howard Pyle. Sometime later (between 1916 and 1919), Elenore wrote to Pyle’s secretary that the only work she was glad to have done was under Mr. Pyle.

She gained a strong reputation as an illustrator. She would take photographs for later oil paintings, something illustrators were known to do. Her work appeared in many magazines, such as Scribner’s, Saturday Evening Post, and Harper’s Magazine. She also did illustrations for many books, including Kidnapped and Treasure Island (Robert Lewis Stevenson), Swiss Family Robinson (Johann David Wyss), Old Fashioned Girl (Louisa May Alcott) and Grimm’s Fairy Tales. Evan Nagel Wolf, in the 1919 supplement of International Studio, wrote “Elenore Abbott loves her fairy tales, and no child who receives such a book will be disappointed… Elenore Abbott is not on the surface a clever artist; her active, vigorous yet idealist’s mind is brought into subjection and guides the long sensitive fingers that hold the water color brush.”

She married C.Yarnall Abbott and in 1907, they had one child, a daughter, Marjorie “Peggy” Abbott, who later married Robert Harvey. Marjorie Abbott Harvey went on to become a well-known author of cookbooks. Elenore came to Rose Valley in 1911. She is reputed to have painted her house on Possum Hollow road a Bermuda pink – quite unusual for the day! Elenore’s sister, Marjorie, married Petrus van Santen Kolff and they moved to Rose Valley in 1910. After Marjorie’s death, October 15, 1919, Elenore took in her two daughters, Sonya and Elenore, who were frequently models for her.

Elenore Abbott also did the scene design for the original theater group at what is now Hedgerow Theatre. She created the skrims for The Emperor Jones, which were used by Hedgerow for many years. She also helped to establish the Rose Valley swimming pool by donating land, and in 1928 she sold several of her paintings to finance the construction of the pool.

She was a member of the Philadelphia Water Color Club and the Plastic Club of Philadelphia. Her work is in collection at the Brandywine Museum in Brandywine, Pennsylvania.

Sources for this biography:
The Hedgerow Theatre: An Historical Study, by J.C. Wentz, Published 1970.
Catalogue: Exhibition of Rose Valley Art and Handicrafts 2001